Contrasting stripes are a widespread feature of group living in birds, mammals and fishes 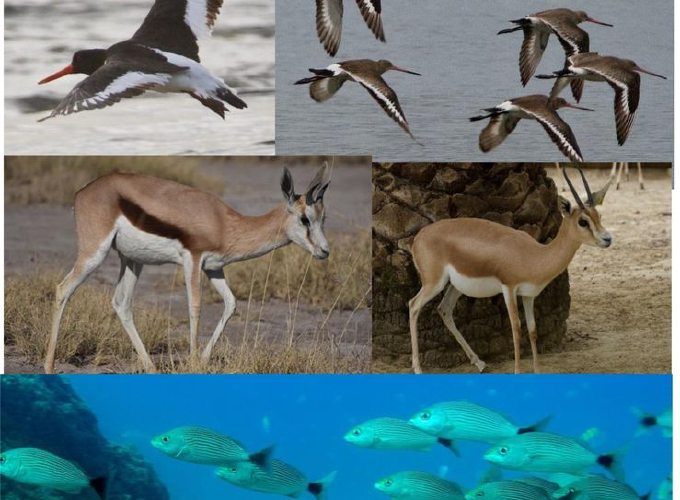 Contrasting stripes are a widespread feature of group living in birds, mammals and fishes

Grouping is a widespread form of predator defence, with individuals in groups often performing evasive collective movements in response to attack by predators. Individuals in these groups use behavioural rules to coordinate their movements, with visual cues about neighbours’ positions and orientations often informing movement decisions. Although the exact visual cues individuals use to coordinate their movements with neighbours have not yet been decoded, some studies have suggested that stripes, lines, or other body patterns may act as conspicuous conveyors of movement information that could promote coordinated group movement, or promote dazzle camouflage, thereby confusing predators. We used phylogenetic logistic regressions to test whether the contrasting achromatic stripes present in four different taxa vulnerable to predation, including species within two orders of birds (Anseriformes and Charadriiformes), a suborder of Artiodactyla (the ruminants), and several orders of marine fishes (predominantly Perciformes) were associated with group living. Contrasting patterns were significantly more prevalent in social species, and tended to be absent in solitary species or species less vulnerable to predation. We suggest that stripes taking the form of light-coloured lines on dark backgrounds, or vice versa, provide a widespread mechanism across taxa that either serves to inform conspecifics of neighbours’ movements, or to confuse predators, when moving in groups. Because detection and processing of patterns and of motion in the visual channel is essentially colour-blind, diverse animal taxa with widely different vision systems (including mono-, di-, tri-, and tetrachromats) appear to have converged on a similar use of achromatic patterns, as would be expected given signal-detection theory. This hypothesis would explain the convergent evolution of conspicuous achromatic patterns as an antipredator mechanism in numerous vertebrate species.