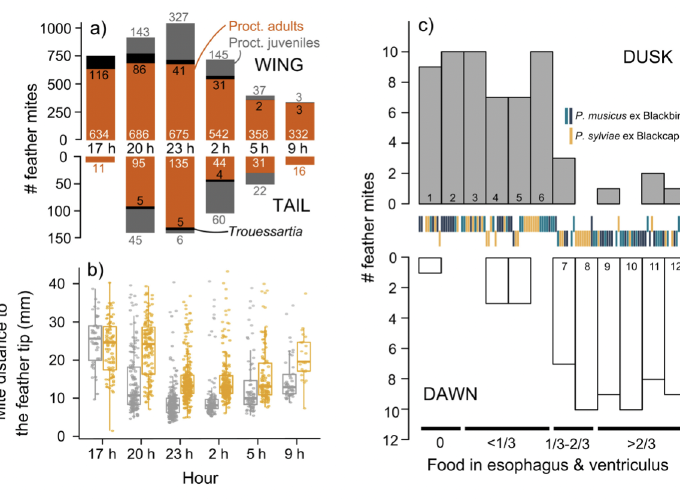 Birds host a vast diversity of feather symbionts of different kingdoms, including animals (e.g., lice, mites), fungi, and bacteria. Feather mites (Acariformes: Astigmata: Analgoidea and Pterolichoidea), the most abundant animal ectosymbionts of birds, are permanent inhabitants of the pterosphere (ptero feather in Greek; Labrador et al. 2020), and the ones studied here are easily spotted as small (ca. 0.5 mm) dots on the surface of flight feathers. They are highly host specific symbionts (Doña et al. 2018), and they seem to be commensals or even mutualists of birds by taking detritus and microorganisms such as fungi and bacteria from feathers, some of which are keratinophilic and therefore can damage the feathers (Blanco and Tella 1997, Galván 2012, Doña et al. 2019). However, many basic questions remain to be answered, such as the moments and the places where feather mites eat. Indeed, we wondered whether this might be partly because feather mites have been studied mainly during the day, when (most) birds fly, rather than during the night when mites seem to move more freely on the wings, according to two old anecdotal reports (Dubinin 1951, McClure 1989). To investigate the night ecology of feather mites, we initially spent a whole night observing them on two individual birds. At that point, we were unaware of how it would change our understanding of the pterosphere.