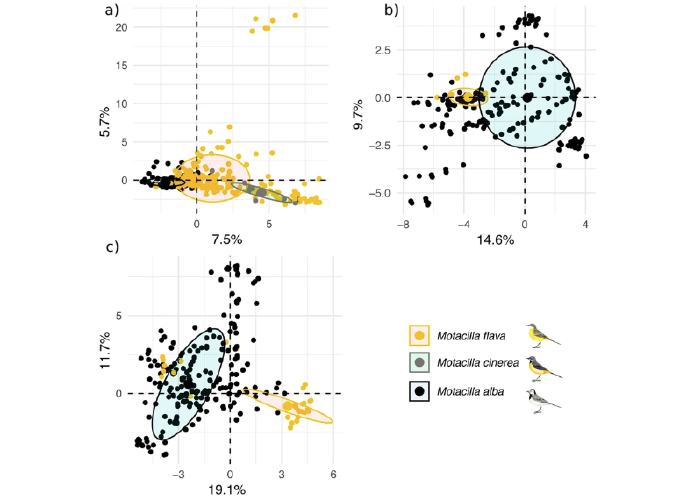 Some symbiont species are highly host-specific, inhabiting only one or a very few host species, and typically have limited dispersal abilities. When they do occur on multiple host species, populations of such symbionts are expected to become genetically structured across these different host species, and this may eventually lead to new symbiont species over evolutionary timescales. However, a low number of dispersal events of symbionts between host species across time might be enough to prevent population structure and species divergence. Overall, processes of evolutionary divergence and the species status of most putative multi-host symbiont systems are yet to be investigated. Here, we used DNA metabarcoding data of 6,023 feather mites (a total of 2,225 OTU representative sequences) from 147 infracommunities (i.e., the assemblage consisting of all mites of different species collected from the same bird host individual) to investigate patterns of population genetic structure and species status of three different putative multi-host feather mite species Proctophyllodes macedo Vitzthum, 1922, Proctophyllodes motacillae Gaud, 1953, and Trouessartia jedliczkai (Zimmerman, 1894), each of which inhabits a variable number of different closely related wagtail host species (genus Motacilla). We show that mite populations from different host species represent a single species. This pattern was found in all the mite species, suggesting that each of these species is a multi-host species in which dispersal of mites among host species prevents species divergence. Also, we found evidence of limited evolutionary divergence manifested by a low but significant level of population genetic structure among symbiont populations inhabiting different host species. Our study agrees with previous studies showing a higher than expected colonization opportunities in host-specific symbionts. Indeed, our results support that these dispersal events would allow the persistence of multi-host species even in symbionts with limited dispersal capabilities, though additional factors such as the geographical structure of some bird populations may also play a role.