Quantitative Interspecific Approach to the Stylosphere: Patterns of Bacteria and Fungi Abundance on Passerine Bird Feathers 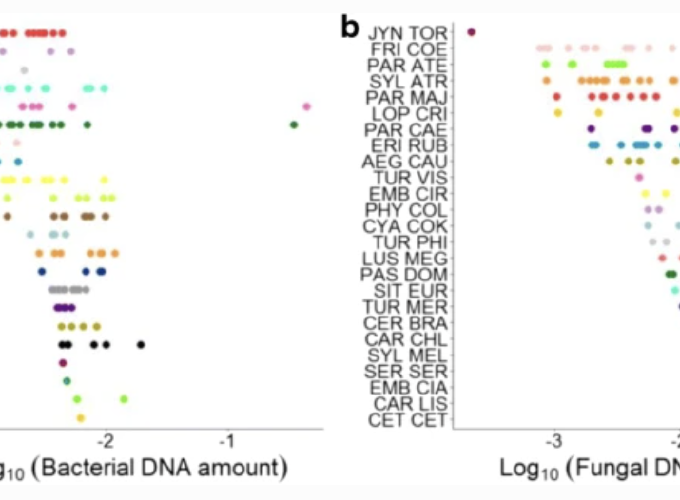 Quantitative Interspecific Approach to the Stylosphere: Patterns of Bacteria and Fungi Abundance on Passerine Bird Feathers

Feathers are the habitat of a myriad of organisms, from fungi and bacteria to lice and mites. Although most studies focus on specific taxa and their interaction with the bird host, anecdotal data glimpse feathers as holders of a system with its own ecology, what we call here the stylosphere. A major gap in our knowledge of the stylosphere is the ecology of the total abundance of microorganisms, being also rare to find studies that analyze abundance of more than one group of microorganisms at the bird interspecific level. Here, we quantified bacterial and fungi abundances through qPCR on the wing feathers of 144 birds from 24 passerine and one non-passerine bird species from three localities in Southern Spain. Bacteria and fungi abundances spanned three orders of magnitude among individual birds, but were consistent when comparing the right and the left wing feathers of individuals. Sampling locality explained ca. 14% of the variation in both bacteria and fungi abundances. Even when statistically controlling for sampling locality, microbial abundances consistently differed between birds from different species, but these differences were not explained by bird phylogeny. Finally, bird individuals and species having more bacteria also tended to held larger abundances of fungi. Our results suggest a quite complex explanation for stylosphere microorganisms’ abundance, being shaped by bird individual and species traits, as well as environmental factors, and likely bacteria–fungi interactions.