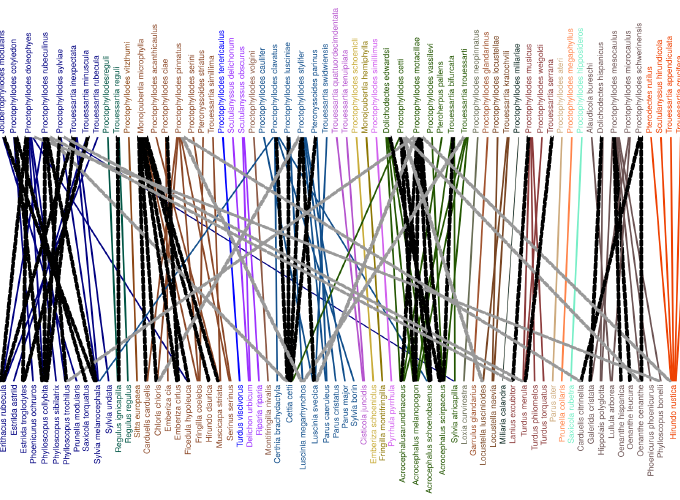 The high relevance of host‐switching for the diversification of highly host‐specific symbionts (i.e., those commonly inhabiting a single host species) demands a better understanding of host‐switching dynamics at an ecological scale. Here, we used DNA metabarcoding to study feather mites on passerine birds in Spain, sequencing mtDNA (COI) for 25,540 individual mites (representing 64 species) from 1,130 birds (representing 71 species). Surprisingly, 1,228 (4.8%) mites from 84 (7.4%) birds were found on host species that were not the expected to be a host according to a recent bird–feather mite associations catalog. Unexpected associations were widespread across studied mite (40.6%) and bird (43.7%) species and showed smaller average infrapopulation sizes than typical associations. Unexpected mite species colonized hosts being distantly related to the set of their usual hosts, but with similar body size. The network of bird–mite associations was modular (i.e., some groups of bird and mite species tended to be more associated with each other than with the others), with 75.9% of the unexpected associations appearing within the module of the typical hosts of the mite species. Lastly, 68.4% of mite species found on unexpected hosts showed signatures of genetic differentiation, and we found evidence for reproduction or the potential for it in many of the unexpected associations. Results show host colonization as a common phenomenon even for these putatively highly host‐specific symbionts. Thus, host‐switching by feather mites, rather than a rare phenomenon, appears as a relatively frequent phenomenon shaped by ecological filters such as host morphology and is revealed as a fundamental component for a dynamic coevolutionary and codiversification scenario.